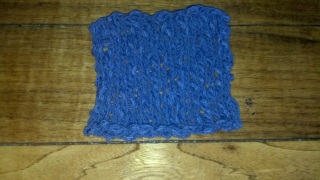 Despite having multiple projects on needles right now I’ve been unmotivated by all of them so I decided it was time to complete another square.  I went into my yarn room and came out with a ball of purple yarn I bought at a store in Montpellier, France.  It is called Puerto by Lang Yarns.  It’s a fun yarn.  I’ve done nothing with it yet but bought a few balls so I’m sure the perfect project will come along.

In September, 2010 my friend Michelle and I set out on a knitting tour to France led by knitting author, Kristeen Griffin-Grimes.  We spent a day travelling to Montpellier.  I loved the city the moment we pulled in!  I spent the day with two of the girls we met on the trip, Mindy and Leslie.  We got lunch at an outside cafe and then set out in search of the yarn store.  We were so excited when we turned down a little alley street and saw the cutest sign and shop window for a store called Avant Apres.  We were very sad to find it was closed but upon closer inspection found it was just closed for lunch.  We wandered around the streets to kill time before the store opened again.  We found a kitchen gadget store that took up most of the time.  Somehow kitchen gadget stores are fascinating no matter what country you are in!

After the lunch break we headed back.  We found the woman in the shop to be very friendly to us Americans.  She even spoke a fair amount of English.  The shop had lots of yarn, a lot of it available here in the States.  They also had a ton of buttons, notions, ribbons and other odds and ends that were beautiful.  The woman was so kind that when I asked where the nearest public restroom was (hard to find in France…) she allowed me to use the one in the shop.  It was basically a toilet in the closet which was its own unique experience.