I took advantage of the extra day off this week to hop in my car and make the 2 hour drive to Pittsburgh to check out Knit the Bridge.  I had heard about it awhile ago and really wanted to check it out.  What I read was that a knitting guild in Pittsburgh had received permission from the city to “yarn bomb” one of the many bridges in downtown Pittsburgh.  For those non-knitters, yarn bombing is covering public objects in knitting.  It is basically a public art installation.  They seem to be catching on in a number of places.  This is the closest I’ve been to an organized yarn bomb.

But then life was getting in the way, it seemed I had plans for all the weekends it was going to be up.  I also wondered exactly what was going to be bombed.  If it was just a few blankets hanging on the bridge I was not sure it was worth the trip.  The pictures from the bridge once all the pieces were installed were amazing and I knew I must try to find a day to go see it in person.  Heck, I’ve traveled to NYC for knitting shows, I should be able to drive 2 hours to see this bridge.

Turns out I had no plans for Labor Day.  My mom was looking for something to do so I picked her up and we headed out.  First stop was lunch with my college roommate.  We met at restaurant near the Ikea (for those familiar) called Burgatory.  I picked it because we don’t have them here in C-town.  It was good – a little bit of a B Spot rip off but very tasty.  When they bring you the bill they bring fortune cookies.  My mom handed them out to and my roomie.  I opened mine and it said “fill in the blank – we took a break”  What???  I have no fortune.  Both my mom and my roomie had actual fortunes.  I’m still a little disturbed…

And then it was off to the bridge.  Funny side story – my mom is not a fan of bridges and I tend to forget this.  When you drive into Pittsburgh through the Fort Pitt tunnel you come right out of the tunnel onto a bridge over the river.  We’re lucky I was not actually relying on her for directions because we may still be driving around Pittsburgh.  That was not her idea of a good time!

We found the Andy Warhol (formerly known as the 7th Street) Bridge and drove over it and back over and then parked in a lot at one end.  My mom hung out at the car and I took my camera and my phone and headed out to check it out in greater detail.  I got to the bridge and took off the lens cap to the camera and hit the on button only to realized my freshly charged battery was sitting on the bookshelf at home.  Lucky for me my phone takes good pictures.  Here are a few of my faves!

And these were great too! 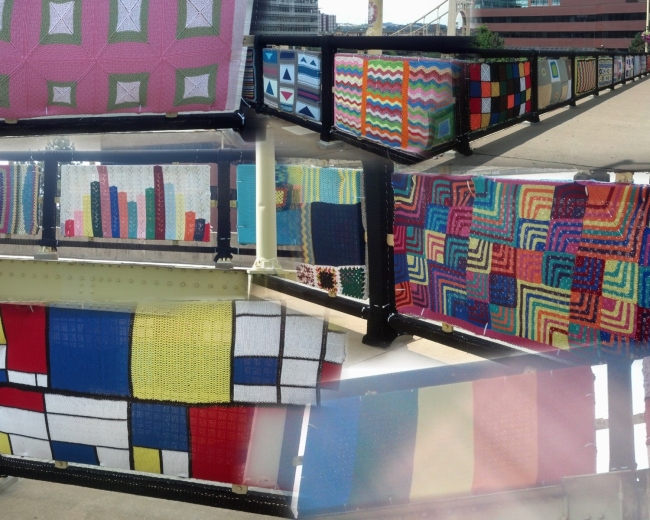 I was really shocked at the number of people who were also there checking out the project.  It was really great to see that many people out.  The squares were all so different and showed a wide variety skills, techniques and color choices.  I was also happy to see them holding up so well over time.  I believe I read the blankets are being donated to homeless shelters and animal shelters once they are taken down.

We stopped to get soda and then hopped back on the turnpike.  Fun note from the trip home: there were issues in the EZ Pass lane in Ohio and as I went to drive through the arm came down and bounced off my windshield.  It seemed like it was covered in plastic so no harm done, except for my mom who thought I was busting through the gate.  It was the perfect way to spend a day off!!

I love to knit, crochet, cross stitch, sew, craft, read, cook, & bake. I also enjoy listening to country music and audiobooks. I love to watch sprint car and NASCAR races. I really enjoy making things to gift to loved ones. I also make hats to donate in memory of my father, sister, and grandparents!