My dad and I left yesterday and flew the 11 hours it takes to get to Honolulu.  Suffice it to say my dad has no burning desire to see Australia now…  We got in around 6:00 pm and I was feeling okay even with the flying and the time change (5 hours).  We came to visit my dad’s cousin who spends quite a bit of time over here and owns a house on the North Shore (when I saw on, I mean on – more on that later).  He was very concerned with what time were coming in and what the traffice situation was.  I thought – “it’s Hononlulu, how bad could it be?”  Answer – bad, really bad.  I mean, Los Angeles bad.  I could never live here, even with everything else going for it.  By the time we got to house it was dark, pitch dark so while I could hear the roar of the ocean I had no idea how close it was.  There is nothing like falling asleep  to the sound of the surf.

I woke up this morning refreshed and ready to go.  I looked out the bedroom window and saw the ocean – right there, along with the mountains and tropical trees, just beautiful.  Turns out they have beach access right in their backyard.  Just a few steps down the path and beach!  It’s pretty sweet!  For all you Lost fans, I can see the beach where they filmed the series from where I’m sitting right now if that gives you any idea.

We decided to head in to Honolulu today.  Dad and I set out with the tour books and the first stop was going to be Pearl Harbor, until we missed the exit.  Signage is a little lacking down here, speed bumps  they have plenty which is ironic because you can rarely speed given all the traffic.  So, we kept driving and  our new first stop was the Punchbowl National Cemetary.  Very beautiful and active cemetary.  Also, great view of Honolulu and Diamond Head.  After that we had to find food.  Our plan was to stop on our way to the highway but unlike home, there are not fast food  joints on every corner.  We grabbed a quick bite and decided given  the traffic and lack of signs we would drive to mall where you could buy  tickets for a hop on/hop  off trolley.  And, if you’ve read this blog before you know I have a hard time passing up trolley tours!  Sadly, when we  arrived at the ticket booth it was closed for lunch 😦

So we wandered around and were very near the Royal Hawaiian Hotel.  This building had been used by Hawaiian royalty and is now an upscale resort.  However, since they don’t use many doors or walls here we walked right in.  The  first thing we saw was the hotel workers setting up for a wedding which would overlook Wakiki beach.  It was fantastic!  I was then convinced we could  access  the beach through the hotel and we did!  I got to pop my toes in the Pacific and marvel  at the sun, sand and surf!  Quite  a different  scene from things up  at the North  Shore where the waves come fast and furious.

After that we headed back and got our trolley tickets.  We bought the historical Hawaii tour which took up by some of the older hotels on Wakiki Beach and then went up  to the Iolani Palace.  We hopped off there and checked the Hawaii state  building,  the palace, the statue of King Kamehameha

(which happens to be in front of the Hawaii Supreme Court – quite different from other Supreme Courts I’ve seen).  It’s also near the oldest Christian church on Oahu which is made from coral stone,  probably not the best use of coral but what did they know back then?

Hopped back on the trolley (by the way, we used Wakiki Trolley and they were pretty good, our one driver was much better than the first driver but it worked out well and they were fairly timely).  The last two stops were shopping malls which clearly help  subsidize the cost of the tour but that’s okay.  We got in the car and went back to tackle the Honolulu traffic.

We stopped for a snack on the way back to the house and I had heard about the masalas so tried those – two big thumbs up!  I had chocoloate and my dad had custard so we each tried some of both.  We may made it back to the house and now I’m sitting on the beach watching the sunset as I type.  I’ve never seen it drop so fast – I could barely get a picture before it disappeared.  Here’s a little taste of what I watch!  What a beautiful world!! 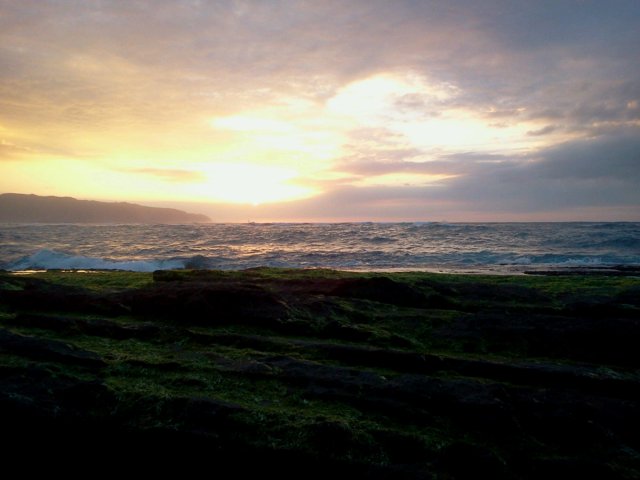