The forecast was Thursday looked to be one of the hottest days of the trip.  We decided to start the morning at the famous black sand beach, Punaluu.  The black sand is caused by the lava from the volcano and is really black and really rocky.  The big attraction here (besides the black sand) are the sea turtles.  The sea turtles nest on the beach and come up to rest and sun.  They have a large circle of the beach marked off to protect the turtles (in addition, there is a state law that you cannot get closer than 15 feet to the turtles).  There is a big area with signs and marked off with rocks for the turtles to hang out.  When I arrived there were a few curious turtle watchers and all were standing outstanding the circle.  Shortly after I arrived a tour bus came and dropped of its riders for short stop at the beach.  And, of course, the first couple off the bus went tramping right through the middle of the circle.  Lucky there were no turtles at the time.  It was interesting that all of the turtle watchers present started yelling at said rude tourist couple about getting out of the turtle circle.    Buses came and went while I hung out on the beach.  Since they are turtles (and not under the control of any sea park, etc.) you kind of have to hang out and wait for them to do their thing.  Tour buses came and went during the time I spent.  In the end, there were about 7 turtles trying to find space on the rocks and I was watching with two other couples who were also from various spots in Ohio.

I would be remiss if I didn’t mention the legends I heard before heading over.  I was talking about my upcoming trip with my knitting group and one of my friends had been to Hawaii, and particularly to the Big Island.  She implored me, a number of times that night, to not bring back any of the lava rocks back home with me because it was bad luck.  She was quite serious about this.  I was telling my Dad this story the next day and he said I had told him and I said no, I heard it last night and then he remembered his co-workers had told him the exact same thing.  I did read in Fodor’s that no one has been able to trace the legend but some believe it was started by park rangers to stop the loss of black sand since it can only be created by lava flow.  Either way, wasn’t willing to chance it!  Pictures only for me!

We then stopped at the Punalu’u Bake Shop.  It is the southernmost bake shop in the US!  They have free samples of sweet bread and also have full lunches available.  They have a beautiful gazebo where you can sit and eat the delicious malasadas and have a cool drink after a hot morning on the beach.

After lunch it was back to the volcano.  We made a stop at the steam vents and I hiked over to the sulphur rocks. 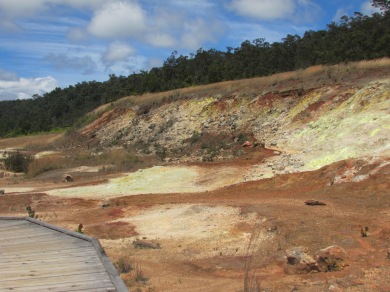 After all the morning activity it was time for a drive.  We started down the Chain of Craters road.  With the park map and signs there are a number of stops as you head down the mountain and eventually end up at the ocean.  There was also about a 15 degree temperature change from top to bottom.  The funny thing about the drive is you get in a groove so the people you meet at the first stop will follow and lead you down the whole drive.  We were heading down with a German couple who spoke little English so we would just nod and wave from stop to stop.  We did not stop at every stop and did not keep track of how long the 19 mile (one way) drive took.  The payoff at the end is a rough parking lot with limited facilities.  There are some very primitive toilet facilities, a ranger’s station and a small shack that sells cold drinks (and could really charge much more for them) and some souvenirs from the end of the road.  There is also a small, but rocky, hike to the Holi Sea Arch which on a sunny afternoon is stunning. 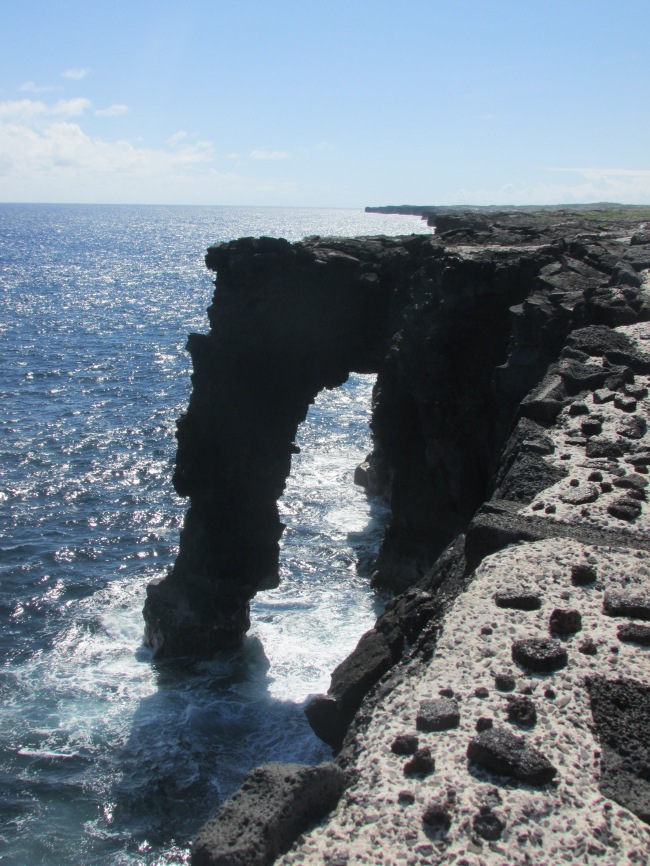 You can also take a longer hike (from what people told me about 20 minutes one way) to see the end of the road.  The road has been closed by lava flow that hardened across the road.  Given the heat I passed on that – the people coming back looked really, really hot and I’ve heard mixed reviews on how interesting it actually is to see.

We headed back up the road and stopped for dinner at the Lava Rock Cafe – cute name and good food, and one of the few places in Volcano to eat.  Then it was time to get packed up as it was our last night in Hawaii.

3 thoughts on “Turtles and Volcanos”

the knitwear designs of Cheryl Toy

A fun little blog about food, crafts, and general geekery