For a few months now a couple of the gals in my knitting group have been talking about Lollipop Yarn.  The colorways are beautiful and I was definitely interested.  The snag in the whole thing is that this shop releases new products on certain days and times (usually Sundays at 7 eastern time) and when the yarn is released it is snatched up in mere minutes.  I don’t have the fight for that type of aggressive shopping.  Black Friday and I are not friends and I spend the day inside decorating for Christmas.  And, I never remember to turn on the computer at the designated day and time to even attempt to buy it.

With that being said, last Sunday I actually remembered and decided to give it a go.  At least I would not be physically harmed attempting to buy the yarn…  I signed on around 6:55 and kept refreshing until the yarn magically appeared in the Etsy store.  I had been warned about cart jackers (my friend’s term) so did not stop.  Saw the Great Googly Moogly, put it in my cart and immediately checked out before someone could buy it out of my cart.  I have no idea how it all works but I didn’t look back and at the end was successful in my purchase.  Shopping as a blood sport just is not me!

Three days later there was a little package on my doorstep when I got home.  I was not sure if I was more excited about my new air conditioning (which I won’t be needing anytime soon) or the new yarn, probably the yarn…  I opened the box and found this lovely ball of yarn waiting for me! 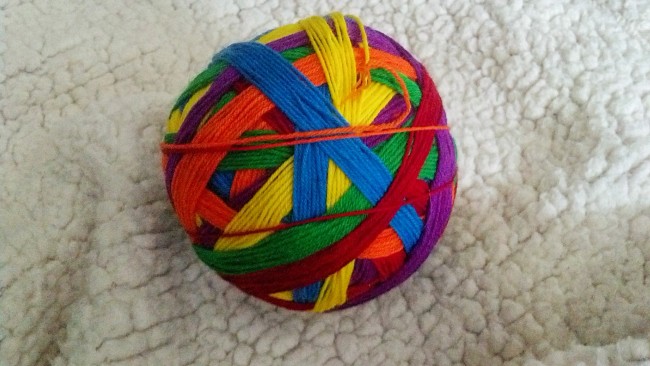 The colors are amazing!  The really cool thing about this yarn is the super clean color transitions.  She somehow manages to cut off one color before starting the other and avoids some of those weird brown/greys that come in self striping yarn.  I could hardly wait to get it on my needles but was having a busy week.  I did get a bit of a sock started.

I can’t wait to get more done!  And with this snowy afternoon/evening I have a feeling that will be looking more like a sock by the time I head to bed tonight!

2 thoughts on “The Thrill of Victory”

The Knitwear Designs of Cheryl Toy