This is month 2 of the yarn of the month club I talked about last month.  We got the e-mail letting us know the yarn was ready for pick up.  There was also an invite to a sit and knit social for yarn club members.  This was another incentive for me to join – the promise of social meet ups in the various neighborhoods which are providing the color inspiration.  But, let’s start with this month’s yarn.  The neighborhood is Tremont and this is what we got. 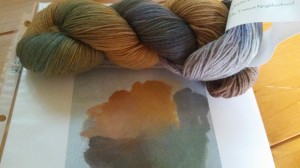 Tremont is just west of downtown and close to the steel mills that used to be the main industry here in Cleveland.  The entire neighborhood is listed on the National Register of Historic Places.  There are a number of very old churches in the area.  It is one of the oldest neighborhoods in Cleveland.  I think the colors used this month reflect that age and grittiness of the area.  In recent years it has undergone a transformation and is now full of art galleries, trendy restaurants and independent shops.  Some people would say it’s the “hipster” section of Cleveland.  Probably the most famous thing in Tremont is the Christmas Story house, the outside of the house was used in the movie A Christmas Story and is now a museum.  For me, Tremont is that neighborhood I can never find.  I almost always have to use my GPS to get there and/or get home.  Don’t ask me why, I just am at a loss when I have to there.  Over the summer we had knit night down there – we started at one of the hip restaurants and then went to the large public park which is at the center of the neighborhood where we watched a free dance performance.  It was one of those nights where it kind of felt like we lived in a real city.

And now, today was the social sit and knit for club members.  It was being held outside and so we were lucky and the weather more than cooperated – it was a perfect fall day.  It was held as the Seltzer Sculpture Garden which is located in the Edgewater neighborhood that inspired last month’s colors.  I have driven down this street hundreds of times and never knew the park existed.  I had always seen this large globe and just thought the people that lived in that house had interesting taste in yard decorations. 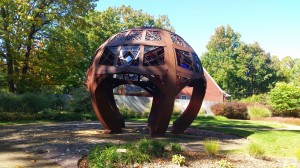 Turns out I’m not the only one who thought this was private.  I posted a picture on Facebook and had several comments from people who live in the area and did not know it was a public park.  The story is that the people who live in the house next to the park are artists so they purchased the two lots adjacent to their property and set up this sculpture park.  They have set up a fund to endow the park after they are gone and now I’m telling everyone about this!  What a hidden gem here in our city!  I can’t wait to take my knitting group back to sit and knit.

As it worked out, I’m the only club member who showed up.  It was still great, I got to spend the afternoon with the owner of my LYS and the woman who came up the color palettes for the club. I did not work on any projects with my club yarn (way to go me – did not cast on a new project 🙂 ) but did continue to work on Campfire cowl I wrote about last week.  I hope more people will come to the next event because they really missed out.  And, I can’t wait to see what next month brings!!

Here are a few more pictures from the park today – enjoy!

There was an error retrieving images from Instagram. An attempt will be remade in a few minutes.