November has been crazy busy for me and this led to quite a delay before I could go pick up my November yarn.  I was able to see a sneak peak on Facebook which held me over until I got to the store.  This month’s color is based on the Gordon Square Arts District and looks like this: 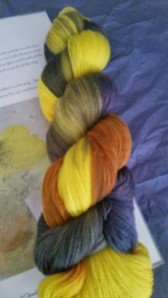 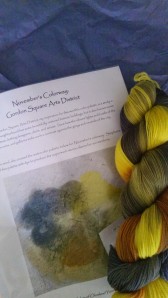 A little background for the out of towners who may be reading.  The Cuyahoga River runs through the middle of Cleveland and divides the city into the west side and the east side.  I realize this is common in many areas but the lines are firmly drawn here and it is usually the first thing you ask someone.  I am a west-sider.  One of the only things we were really lacking here on the west side was an arts district.  All of the arts areas were on the east side and sometimes it’s just too much effort to cross the river.  The east side has the art museum and the the cool, arty movie theater.  That all changed with the development of the Gordon Square Arts District.

What used to be a run down main drag has been slowly revitalized and is now home to restaurants, shops, galleries, a cool, arty movie theater and even live theater.  My hair salon, Honeycomb, is in the area as is Yellowcake – a fashion shop owned by Valerie, a former contestant on Project Runway.  I thought of both of these when I saw all the yellow in the yarn this month.  The area is home to Cleveland Public Theater which runs some edgier shows and has a lot of intimate theater space for smaller productions.  I have a few friends who have been involved in productions at the theater.  I love having a theater that shows the independent films on my side of the river.  With everything going on in Gordon Square I really don’t need to cross the river now!

One thought on “November Yarn of the Month”

The Knitwear Designs of Cheryl Toy