Well, I think I’ve finally found the perfect travel project!!  And, it just happens to be what’s on my needles this weekend.  I have two weddings to attend in May.  Both couples are in their mid-20’s and both started dating when they met in youth group, the youth group I’ve volunteered with since all four of them were just freshman in high school.  I’m touched that they’ve invited to celebrate their special days and am looking forward to both weddings.  Being me, I wanted to knit something but weddings don’t scream hand-knit gifts quite the way babies do.  That’s when I remembered I have favorited a cool dishcloth pattern and decided to knit those up and tie them together with a gift card to include something handmade and something they could really use – cash to spend setting up their new homes.  Now, I started planning all this in January because I needed to knit 8 dishcloths before May – that came out to two a month.  I’ve done really with the schedule.  Last month I had a plane ride to El Salvador and that’s when I found out just how perfect of a travel project these are.  The pattern is super easy to memorize so it doesn’t need to be out.  The yarn doesn’t take up much space and there’s no counting involved.  And, if you’re flight is long enough you can finish one – like I did last week!  Here’s the info: 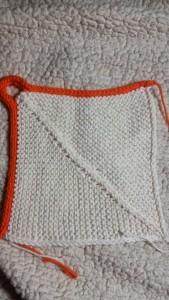 It’s a fun pattern – you start by knitting an i-cord and then you pick up and knit the stitches so it’s being knit on a diagonal using a center double decrease and in the end you have a square!  Another bonus – the designer is donating proceeds to the Special Olympics.  On Ravelry she shows them in groups of four so that’s what I’m doing.  Denim for one couple and ecru for the other.  For travel purposes, I’ve been knitting the two i-cords and then bringing along only the main colors and the one set of needles which cuts down on what I need to bring along.  I’m down to the final two dishcloths so I’m confident they will be ready for the weddings.  I’ll be sure to post final pictures!