I hope everyone has enjoyed the holidays!  I can’t believe this is the last post of 2015!  I’m going to start with Christmas gifts that have been given and can now be revealed (most were finished pre-December).

First up are the fingerless mitts I made for two of my friends who went above and beyond this year and so these were more of a thank you gift as opposed to an actual Christmas gift. 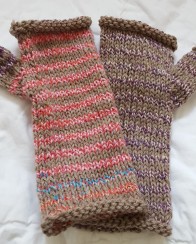 Pattern is Minnesota Mitts Four Ways and is a great deal!  It’s only $2.50 and includes instructions for two types of fingerless mitts and two types of mittens.  These are the stockinette fingerless mitts (I hate ribbing so these were awesome!).  I used yarn from my stash – the neutral is Cascade 220 Superwash that I got from one of the rummage sale hauls.  The color is Stonehedge Fiber Mill Crazy Mill Ends which is a variegated yarn of various mill ends.  I did manipulate the color changes a bit as one of my friends loves pink so I wanted to get to the pink for one of her mitts. These knit up so quick and made great gifts!

Next up is this little star ornament which ended up being a gift for my hairdresser.

I used the Knit Star Ornament pattern that was part of the 12 ornaments giveaway that was going on over on the HandsOccupied blog.  It was a great mix of knit, crochet and yarn craft ornaments.  I had hoped to make more but got sidetracked by the Ice River snood and hat but I’m definitely saving these for next year!

I got a last minute request to knit a, let’s call it – a building block scarf for Christmas.  It was something I had pinned years ago on Pinterest, a friend saw the pin and contacted me to see if I could make one for her son for Christmas.  I was able to find a pattern and had all the appropriate color yarn in my stash.  This is one of those projects that really requires the proper colors to make it work.  The pattern is Build-A-Scarf by Jessica Owen Day and is a great, quick knit.  I had that scarf done in no time and I knew it looked good because I took it out to work on and the 8 year old who was in the room said “hey, that looks like Legos!”  Score, one for me! 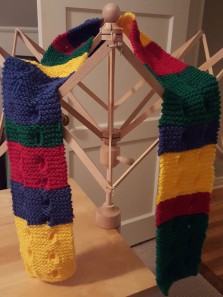 And, then there were the Ice River patterns.  I shared the finished snood last week and have since finished the Ice River hat.  I did make a small modification that I saw on some other finished projects on Ravelry – I added the 3 stripes from the snood into the hat.  I love both!  And, of course, it’s been unseasonably warm here in the Midwest so I’ve not had a chance to wear them yet (although, I’m sure that’s coming soon enough..) 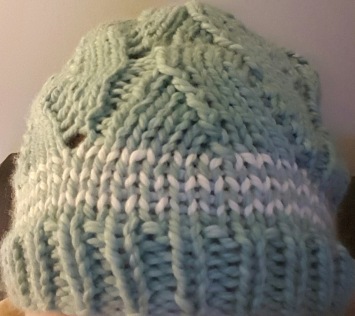 There is one more FO but it has not reached it’s final destination so more on that later.  My brother definitely liked his TCU hat (unable to get him to model that) but it fit him great which was a super exciting bonus!

There is still plenty on the needles and I will share more on that next week when I start looking at ahead to my 2016 knitting plans!