I started off the month is a crazy, finishing frenzy and it was all downhill after that. So, first off the needles this month were my Arne & Carlos socks, which I love!!  I did plain vanilla socks with a fish lips kiss heel and a round toe.  Of course, the fish lips kiss heel is a pattern by the Sox Therapist.  I used the round toe which is included in Sock Architecture by Lara Neel.  It was my first time for both of these heels and toes.  I loved the heel but I did have a little issue with a weird bulge at the end of the heel so I’m guessing it’s something to do with my gauge but I’m just not sure.  I’m going to t keep experimenting. I loved the round toe as I despise the kitchner stitch.

Next I finished the Girlfriend Cowls by Churchmouse Yarns.  I cast this on right after the US Supreme Court decision regarding gay marriage was announced.  Someone on Instagram had started a rainbow-along.  I had this yarn in my stash – it’s America the Beautiful by Destination Yarns so on the needles it went!  The patterns is pretty simple and really did some fun things with this yarn.  I loved how, once I started knitting, it became apparent that as the skein went from primarily reds/yellows to blues/greens.  Sadly, even though it’s April, I’ve worn it quite a bit 😦

The last FO of the month was a quick little test knit I did for Kino Knits.  She happened to e-mail on a snowy Saturday so I cast it right on.  It’s a free pattern on Ravelry which is so awesome.  I had some troubles with Judy’s Magic cast on as I had never done that one before but otherwise it was a super quick knit.  Mary has written it so you can use any yarn you have.  She did hers in sock yarn and I used a worsted weight.  It’s called Rybka (Wee Fishie) and if you are looking for a quick gift knit definitely check it out! 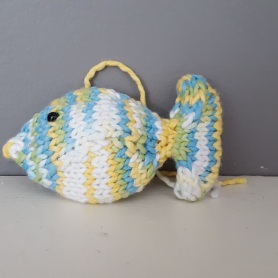 Confession – I knit the fish on April 9th and have finished nothing since 😦  Lots of fun stuff on the needles so here’s hoping I have something to talk about at the end of May!