During my staycation in Denver I had decided that I wanted to go to Fancy Tiger Craft, The Loopy Ewe and My Sister Knits.  Fancy Tiger is relatively close to where I was staying but the last two are up in Fort Collins which is about 1 – 1 1/2 hours away from Denver.  With that in mind, I did something I would not usually do, I reached out to two podcasters that I listen to on a regular basis to see if they would be interested in meeting up and they said yes!!

I think it’s a strange relationship – as a listener of podcasts I feel that I know the hosts as I listen to what is going on in their knitting lives each week or every couple of weeks but that doesn’t work in reverse. For all they knew I could’ve been some crazy stalker from Ohio.  So when I contacted Emily and Becky I led with a disclaimer that I was not crazy and if they were not interested that was cool.  It must have worked because in the end, we decided to meet up on Friday afternoon.

On Friday morning, I hit up Fancy Tiger on my way out of town.  I’ve heard so much about this shop and was really excited.  I got a parking place right in front which I think was quite lucky!  They only have on street parking so I’m sure it can be tough some days.  I loved the front window display and the decor of the store when I walked in.  The girls working were friendly but not overbearing, i.e. they acknowledged I came in the store and then allowed me to browse at leisure.  But, here’s where I have to admit it wasn’t my favorite store (and, disclaimer I don’t sew so did not check out the fabric area which I hear is definitely a draw).  First, there’s not a lot of yarn and the yarn that is there tended to be of a more crunchy, granola type which isn’t my scene.  They definitely had brands I had not seen, and overall the vibe was great in the store. I ended up buying a skein of MJ Yarns Simple Sock in the Green Dragon colorway. I was talking to my friend G when I got back and we talked about how sometimes we build up some of these stores in our heads and then they can never live up to those expectations.  That might be the case here.  I’m definitely glad I went but I might find other places to check out on future trips to Denver. 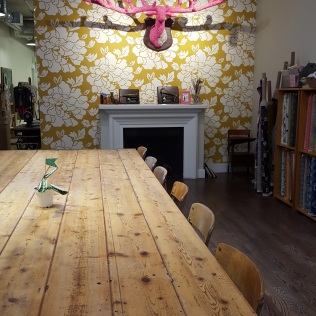 After that I hit the road and headed to Fort Collins.  I had decided to just get a hotel up there so I didn’t have to worry about driving back to Denver at the end of the night and that was a good idea on my part.  I was meeting everyone at The Loopy Ewe.  Emily hosts the Knitting Butterflies podcast and I had chatted with her last year about the Estes Park Wool Market.  Becky hosts the Knit Actually podcast and I found her through a post Emily shared on Instagram.  As soon as I listened to an episode I was hooked and knew she was my type of people.  Becky brought her friend Jen as well, which is good because I feel weird if I’m on the only Jen somewhere 🙂

I loved The Loopy Ewe so much!!!  It was so amazing and they had so many yarns I’ve seen on Instagram and heard podcasters talk about.  My plan was to buy yarn to knit the 3 Color Cashmere Shawl by Joji Locatelli.  Becky suggested that I use Knerd String for it and they had so many colors to chose from that I found just the right 3 colors and the skeins were large enough that I just needed one of each color which was nice.  It was a good choice as well because it is a Colorado dyer, which makes it special vacation yarn.  I’m hoping to get the shawl done in time for Rhinebeck but we’ll see…  I also bought a sock blocker and one of the Ann Budd gauge measures which is super awesome!  And, a skein of sock yarn from Fresh From the Cauldron. 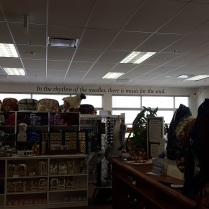 We dragged ourselves away so that we could hit My Sister Knits (MSK) before it closed.  I was on such a high from The Loopy Ewe that I was worried I would not enjoy the next store as much – Wrong!!!!  I’m not sure which I loved more because they offered very different experiences but both were so great.  First, MSK is in an entirely residential neighborhood, in fact, it’s in a carriage house behind a regular house.  There’s a little yarn bombing on a tree out front and then a sign at the gate at the driveway leading you through a beautiful garden complete with chickens to the carriage house where the store is located.  We walked in and were greeted very warmly.

Here’s a funny story.  One of the women working asked if we had been in before.  I said no, I was from Cleveland to which she asked where in Cleveland.  This indicated to me that she knew my fair city as there are two answers to that question – west side or east side.  I told her where and it turned out she grew up in my town, in fact, about 5 minutes away from my house.  I love small world stories 🙂

Back to the yarn – they have so much yarn in this tiny two story carriage house.  I ended with a skein of self striping sock yarn from ScrumptiousPurl and a contrasting skein of Koigu sock yarn for the cuffs, heels and toes.  The very nice ladies took our picture outside in front of the sign and recommended places for dinner, they even offered us bottled water.  I’m sure it had nothing to do with all the yarn we bought 🙂 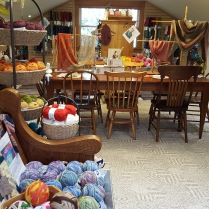 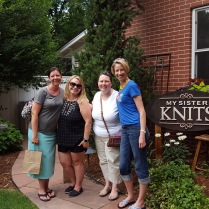 By this time we were hungry and thirsty!  We ended up at a place called Rio which was Mexican and made super delicious margaritas (told you the hotel was a good idea 😉 ) and we knit and drank and talked and laughed.  I marveled at how knitting was the one thing we all had in common and yet, if anyone walked by they would have thought we were life long friends.  I’m so excited that I now have both family and friends in Colorado to go visit.  And, I’m so excited that both Becky and Emily will be at Rhinebeck so I will get to see them again soon!! 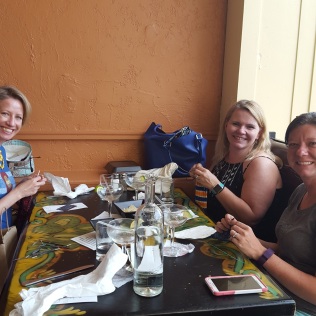 My haul from the day

If you want to hear more about our adventures listen to Episode 53 of Knitting Butterflies or Episode 39 of Knit Actually.  This is a super long post so I’m going to head back to my Ravellenics project now and will have more of my yarny adventures next week!

One thought on “Yarny Adventures”