I feel like this month’s posts have all been about knitting love which, while I’d like to say was intentional, was actually coincidence.  But it probably is the best way to count down the time to Rhinebeck where all things fiber are celebrated.  I’m so excited to be going this year and I will be driving with my best knitting pals from home and when we arrive I will be meeting with both IRL friends and online friends from near and far and I can’t wait!! p.s. did I mention it’s my birthday weekend????

Anyway, back to today’s post.  One of the friends I will be meeting up with is L who moved to Vermont last month and who was worked at my LYS on Thursday nights for the last several years.  We got an invite to a going away party and my mind started thinking that we needed to do something for her.  We are knitters so we must knit, right???  And that’s when I thought of all the cozy memories blankets and thought that was perfect.  I messaged 2 of our other friends and they agreed so the 3 of us set about making it happen.

G set up a secret Facebook group and we all invited knitters to join.  The task was simple – knit an 8×8 square and if you were so inclined make it something that reminded you of L or that L would like.  Drop the square at the store and give it to anyone but L and there was an assembly party at my house the night before the party.

Let me just say when set a task before a group of knitters look out!!  We ended up with somewhere around 37 squares, I don’t recall the exact number but it was definitely uneven.  A few tips if you ever decide to plan a surprise cozy memory blankets.  Leave longer than 24 hours for assemby (we were lucky we had some fast crocheters and were okay with uneven rows); try to really enforce the size rule (we had some real varied sizes) and keep better track of who gave each square (we started out okay but lost our way with that – I had hoped to give L a print out of the blanket with who made each square)

We met at the assembly party and first worked out a layout.  Had we started earlier, we probably would have whipped a few more squares to even it out.  But, we let it go (thanks Elsa!) and just crocheted them together the best we could with the numbers and sizes.  We were split on how we started the joining so on some squares you can see the join and others you cannot.  I’m not sure either way is right or wrong but we probably should have made a decision before we dived in.  There were basically 4 of us who did the assembly and that seemed to be the right number.  It was getting a little confusing on who had what and what was being stitched to what so with more people that would have added to the confusion.  In the end we got it all done and were able to give to her at her party.  I’m sure she will never actually use it (honestly, it’s a bit unwieldly with the various weights and textures of yarn).  It’s definitely not washable but she will always have the memories of the knitters of RCS.  She loved it and was able to identify a pretty high number of squares, proving as always, that we knitters have our colors, etc. and those that work at our LYS really get to know their knitters.  My square was made of yarn that she helped me picked out for a poncho I made and a light purple bulky Lopi because L loves purple and crunchy yarns 🙂 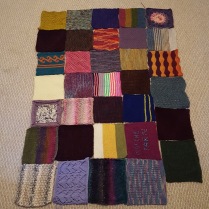 On the floor as we debated layout 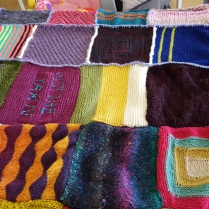 Close up when it was almost complete 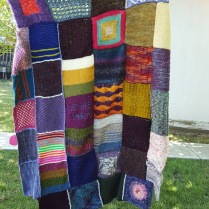 Hanging on the clothesline before we took it to the party