I’ll get back to my Rhinebeck story next week but I wanted to pause and do my monthly round up of FO’s (and there are lots so I had to share!).

First up, I knit a hat to match the Little Purple Sailor Coat.  I had some yarn left over and the baby’s birthday was approaching so I knit this little Bow Cloche which is a pattern from Knit Simple magazine, Fall 2013.  This was definitely a lesson in listen to the notes your previous self left on the pattern.  I had written a note from the first time I made it that the pattern ran really small and so I should knit a size up.  The sizes are 2, 4 and 6 years old.  I was knitting for a 1 year old so I made the smallest size.  I took it into knitting and everyone told me to start over.  I made the size 4 and was still concerned that it would fit.  But, it fits great and she looks adorable in her ensemble. 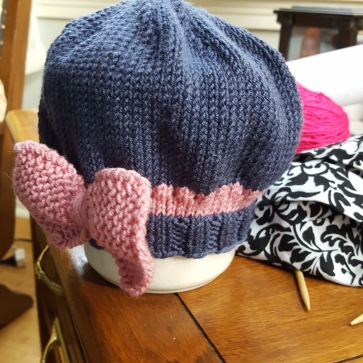 Once I got that done it was time to focus on finishing the Rhinebeck shawl.  It was full steam ahead for the two weeks before the show.  I really needed to get it done by the weekend before so it would have time to block.  And, with much whining and complaining, it was on the blocking mats the Sunday before I left.  There’s a picot bind off and I won’t discuss the number of stitches involved in case you have one your needles but, oy!  I got some blocking help from my friends on Instagram and it looked amazing on the mats.  I also got a ton of compliments at Rhinebeck because that pink popped so much, especially in the bright sun of the day.  My friend Becky wore her sweater knit out of Knerd String as well and we had one overlapping colorway so that was really fun! 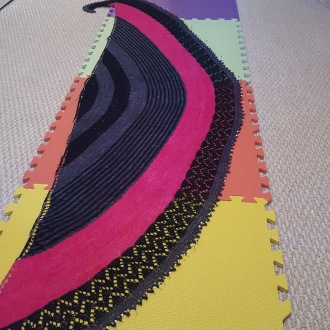 Funny story about the blocking mats.  I bought mine at Five Below and I only had two and knew I would need more for this shawl.  I was out with my Mom and ran into the store to pick up another two mats.  The next day I showed her this picture so she could see what I did with the mats.  She said “is that lace?” and I said “yes” and she said “you knit that?”. Yes, yes, I did but trust me I whined the whole time!

With that on the mats I turned my attention to knitting the cutest little Halloween creature.  I had never seen the work of Susan Claudino and I just love it!  And then Sarah from the Cultivate & Create podcast and Susie from the Prairie Girls Knit & Spin podcast decided to do a Creepy Critter KAL so I got to work.  One of my favorite things is that I used my Candy Skein Summer Fair Foods mini skein pack to knit a Halloween critter!  I knit Patch which is a cute pumpkin headed creature.  I finished him in time to take him to Rhinebeck and he was our trip mascot.  I had hoped to take more pictures of him at Rhinebeck but that didn’t happen (more on that later).  If you want to check out his adventures, I was posting on Instagram with the hashtag #patchdoesrhinebeck.  I loved the colorway names in this mini skein pack – his head is Orange Crush, his body is Chocolate Dipped Banana, and his hands and feet are Pickle Party.  This was a fun knit and I will definitely be knitting more of her stuff.

Last, I finished the twin’s hat.  So I knit the Cavs hat for my goddaughter and a couple of days after my visit her mom e-mailed and said the twin would like one.  She wanted blue, gray and white.  I checked out Destination Yarn and found her colorway Ice Cave and it was perfect.  Here’s where the project falls off the rails – I ordered worsted weight, not fingering.  I had used the Juxtaposed Hat by Sarah Shoo for the first hat and really enjoyed the pattern – if you’re going to knit a slouchy hat it better be fun!  But that pattern is for sock yarn.  I did a search, asked for help, and ended up with a slouchy hat pattern for worsted weight yarn.  Bad news – it was super boring and I knew I would never get through it.  At this point, I had the stitch count for an appropriate sized worsted weight hat and knew the Juxtaposed was a 10 stitch repeat so I pulled out and started with that pattern and it worked!  Things got a little sticky when it was time to decrease because obviously the hat gets taller much faster with the heavier yarn. (I have notes on my Ravelry project page)  I got it done just in time as I’m headed to visit them next weekend and the cold weather is just arriving.  Cute note – I posted a pic of the finished hat on Instagram and my goddaughter (who follows me) liked it and commented that she would wear her hat when I came to visit so maybe I can get a picture of the two of them wearing their hats next week – we’ll see!

Phew!  For a very busy month I got a lot done (although both hats have been on the needles for a while and Patch takes very little knitting time)  I’ll return to my Rhinebeck adventures next week so stay tuned!