I’m so excited about this!  I have a beautiful dpn cozy to giveaway here on the blog!!

The origin of this giveaway started over on Instagram.  I’ve been following MayBea Crafted (I’m not sure how or why I started following her) but she makes lovely project bags and dpn cozies.  A few weeks ago she posted a pic of some dpn cozies she was working on in some really cool feminist fabric so I left a comment about how awesome they were.  She then asked what I like or don’t like in dpn cozies.  I told her I had never used them but was thinking of trying one out and I’d keep an eye out for her next shop update.

Side note, before I continue, I had recently been thinking about dpn cozies after listening to the Yarns at Yinhoo podcast.  Sara mentioned she had never really seen a need for them (and I was agreeing with her).  I did not really understand what they were for what they did.  When Sara said they kept her dpns in place that she carried around with her I started rethinking my position on dpn cozies.  This is what led me to leave the comment on MayBea Crafted’s Instagram post.

Well, a few hours later I got a dm on Instagram from Tanya (the talent behind MayBea Crafted) offering to send me a dpn cozy to try out and let her know what I thought.  I was so blown away by her kind offer.  I sent her my address and mentioned I would be sure to feature on the blog.  That’s when she offered to send two so I could keep one and give one away!

I’ve tried mine out – I swapped out my work socks so that my pair on dpns was thrown in the bag.  Also in the bag is yarn and needles for the little ornaments I work on at lunch to sell at craft shows this fall so this bag gets a workout during the week.  I’ve loved it so far! Despite best efforts to safely place socks back in a project bag, somehow it seems like I often pull them out with one needle missing a row of live stitches to be placed back on the needle.  Using the dpn cozy all my needles and stitches were right where I left them.

I really thought the length of the cozy was just right.  It was long enough to hold the needles but not so long that it did not fit in my project bag or to allow the needles to move around in the cozy.  The snap closures were a little tight but I’m sure they will loosen up with use.  It was beautifully sewn and I love the fabrics.

I’m totally sold on using these cozies and I’m sure I’ll be buying another one from Tanya. Along with the cozies she sent two notepads and the loveliest note that reminded me again why the knitting community is the best!!!

Now, to enter to win – leave a comment on this post telling me whether or not you use dpn cozies and if you do use them what you like and dislike about them.  Contest will close in 2 weeks on April 25th.  I’ll use random number generator to chose a winner – good luck!!! 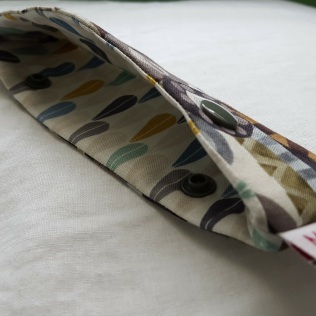 I’ve been excited since I heard there was something called Yarn: The Movie.  And then, I saw some crafty folks hosting a showing down in Columbus, about 2 hours from me but I was going to be out of town.  But I totally lucked out and the Cleveland Museum of Art had a one time showing last Sunday.  A bunch of my knitting friends got tickets and headed to the museum.

There was a line to get in when we got there because they were waiting for the DVD.  I hoped they would get it soon because no one wants to deal with an angry mob of yarn enthusiasts. 6 of us made the trip and I somehow thought we would know everyone at the movie even though that does not make any sense.  We don’t know all the knitters in Cleveland and maybe there were crocheters, who knows???  There were definitely more men than I expected.  Overall, the small auditorium was pretty full so I guess we were not the only interested people in town.

I brought my Ravellenics socks with me because I knew this was the one time it was completely appropriate to knit through the entire movie.  (Side note, I only knit for the first couple of minutes because I did know where the slip stitch pattern started after the stitch marker and my other friend almost lost her ball of yarn down the middle of the theater so I think I’ll continue to skip knitting at movies 🙂 )  Finally, the lights dimmed and it was show time!!  I was so excited!!!  While I had heard a somewhat so-so review of the film, I had also heard a really good review so I remained optimistic.

I loved it – 5 dpns to this movie!!!  I get that it might not be for everyone as parts of it are kind of out there, it was everything I had hoped for.  It really concentrates on the use of yarn as art expression.  The movie follows four different yarn artists in different locations. All four use yarn art expression in different ways.  The movie, through the artists, also explores feminist themes of art, craft and women’s work.  It is beautifully narrated by Barbara Kingslover.

To be clear, this is definitely not a movie about knitting sweaters or how yarn is made. There are a few very cute sheep that make appearances but the movie is about how these four women are using yarn to make a statement in the world.  For those people that are just interested in knitting and/or crocheting as a craft to make things this is probably not the movie for you.  I’m a yarn bomb enthusiast and I love to see what talented and creative people are doing to express themselves and their idea.  When I left the movie I wanted to go out and yarn bomb the world.  I would also add that the movie is not just about yarn bombing – two of the women use yarn bombing in different ways in their art but the other two artists have nothing to do with yarn bombing.

One of my friends that came to movie moved to Vermont this past week so she asked if we could visit her two favorite pieces of art in the museum so she could say good-bye to them before she left.  My other friend is new to the area and had never been to our wonderful museum so we did a quick run through before we headed home.  After watching the movie, it was even more interesting to see what her two favorite pieces were as it was clear that we all express ourselves so differently through art.  It was also fun to show off our amazing (and free) museum to our first time friend.   And now, whenever I go to the museum and see those two pieces I will think of our lovely day out.

Earlier this week I was watching the most recent episode of the Knitting Butterflies podcast and Emily was going to do a review of a new book and I thought she made a great point – she is no longer reviewing, she is recommending.  It was especially timely for me as I plan my blog posts for the month and part of this year’s plan is to do reviews once a month.  My schedule tells me this week’s post is a review of two new to me (and, both newish in general) podcasts.  So, I’m calling this What I’m Listening to This Month and can continue to switch that up depending on what I might be reading, knitting with, or listening to each month.

Before I dive into my latest podcast finds, a few things about podcasts.  I’m primarily an audio podcast listener.  Most of the time I listen while I’m at work where I have no wifi so I download a bunch of episodes for the day before I leave home.  Videos are much harder to manage and are much more distracting!!  I have Android devices so I don’t use iTunes (sorry to all you podcasters – I can’t leave iTunes reviews for you :().  I use the app Podcast Addict.  I can usually find anything on there that is on iTunes.  The app is easy to use and I’ve never had any problems with it.  It seems more and more podcasts are going to video so I’m always excited to find new audio ones for my listening pleasure!

The first podcast I’m listening to is Kino Knits.  Mary lives in Kenya (Kenya!!!) and her podcast, blog and designs can be found at KinoKnits.  I think I first heard about her on the Prairie Girls podcast as they were giving away one of Mary’s patterns.  I finally remembered to look up her podcast and the first episode I listened to was Episode 7.  I’m totally hooked and went back and listened to the first episode, with plans to listen to Episodes 2-6. I love to travel (another part of this blog) and so being able to listen to someone in Africa talk about knitting over the there and the adventures her family is able to take is just the best of both worlds for me.  The sound quality on her podcast is excellent.  And, to my surprise, Mary did a shout out to me in Episode 8.  I have not had a chance to listen to it (tomorrow during my car ride for sure!) but I went to the show notes to write this post and I saw my name there!!  Thanks Mary!!  There are 8 episodes so not a lot to catch up on which makes it’s a great time to tune in!

The second podcast I wanted to talk about today is the Knit Actually podcast.  I found this one through Emily from the Knitting Butterflies podcast.  Becky is the host and she is great to listen to.  She talks about knitting and she also does some of her own dying which is interesting.  Full disclosure – I have a lot of family in Colorado (which is where Becky and Emily are) and I think I was sucked in by the Scoreboard scarf Becky knit for her son documenting the Broncos Superbowl winning season.  It is amazing!!!!  She has 27 episodes out so, again, not too much to catch up on and a great time to subscribe.

If you are looking for new audio podcasts I would definitely suggest you check out these two (and, also Knitting Butterflies and the Prairie Girls, of course 🙂 ) I hope you will enjoy them as much as I do!

One last note – the article I mentioned a couple of weeks ago came out.  CountryLiving.com compiled a list of 13 cool ways to yarn bomb your home and one of my prior posts was included!  You can check it out here – 13 Ideas to Yarn Bomb Your Home!