This blog focuses on my love of knitting and travel and after those two things comes my love of Ohio State Buckeye football.  I’m a devout fan (despite not having attended the actual university) and rarely miss watching a game.  There is something about college kids, most of whom will never make it to the NFL, out there playing for the love of the game (and, maybe some scholarship money…).  So, when it was announced that the Buckeyes made the first ever college football playoffs I immediately booked an airline ticket to Dallas for the championship game because, lucky me, my brother lives in the area.  I told him to get his guest room ready and he pointed out we had to make it to that game, he of little faith.  Halfway through the semi-final I texted him again and told him to get ready and I turned out to be right.

Last Thursday when I was sharing my good news with my knitting group I mentioned I would be in Fort Worth and I was trying to decide to whether or not to stop in at MadTosh Crafts.  Needless to say a few of my knitting friends looked at me like I had lost my mind and were not sure why I was up in the air about it.  I had a lot of game related activities to attend and I had to sneak in some work too and I was only going to be in the area for about 72 hours.  Lucky for me, work was quiet on Tuesday so I headed out to get some lunch, and some yarn.

The store is located in an older area of town and on a brick road.  The parking spots are right off the street and the store is in an older looking strip of stores.  They had a super cute winter themed window with snowflakes and large snow white colored pom poms.  Once you step inside it’s just like a little slice of yarn heaven.  It’s a really good sized space (I guess it’s Texas sized 🙂 ) with wood floors and shelves of yarn everywhere.  In addition to their own yarn they carry a number of other brands including Habu and some local dyers I had not seen before.  Before I headed out I figured I had better have a goal in mind otherwise things could get scary.  I’m planning on using my January yarn (see January yarn post) to do Ysolda’s Follow Your Own Arrow 2 which starts on Monday and calls for two colors so I decided to get a solid to use for that project.  They also had a nice variety of knitting tools, bags, lotions, cards and other novelties.  I found some cute knit kits and I picked up one of those for a Christmas present for this year so more on that later!  There was also a selection of fabrics and plenty of room to knit and sew.  In fact, a small group was gathering to knit as I was shopping.

As it turned out the store is just down the street from the Kimbell Art Museum and they were having a special exhibit – Faces of Impressionism, Portraits from the Musee D’Orsay.  I did not realize it was half price Tuesday and the place was packed.  I almost never see that many people in an art museum here in the States.  The exhibit contained portraits by many of the masters.  My eye kept being drawn towards one particular painting, of course, it was the only Monet in the collection.  This was it:

The permanent collection at the museum is also very interesting and they have some works by well known artists.  It is a little small but makes for a lovely afternoon.  I capped off the afternoon with lunch at Gloria’s Latin American restaurant where they had delicious Salvadoran food.  I would definitely go back there next time I head down to visit my brother.

It was a quick 72 hours and included everything I loved!  It was made extra sweet by the home town Buckeyes bringing home the trophy! 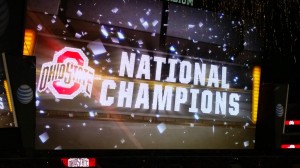